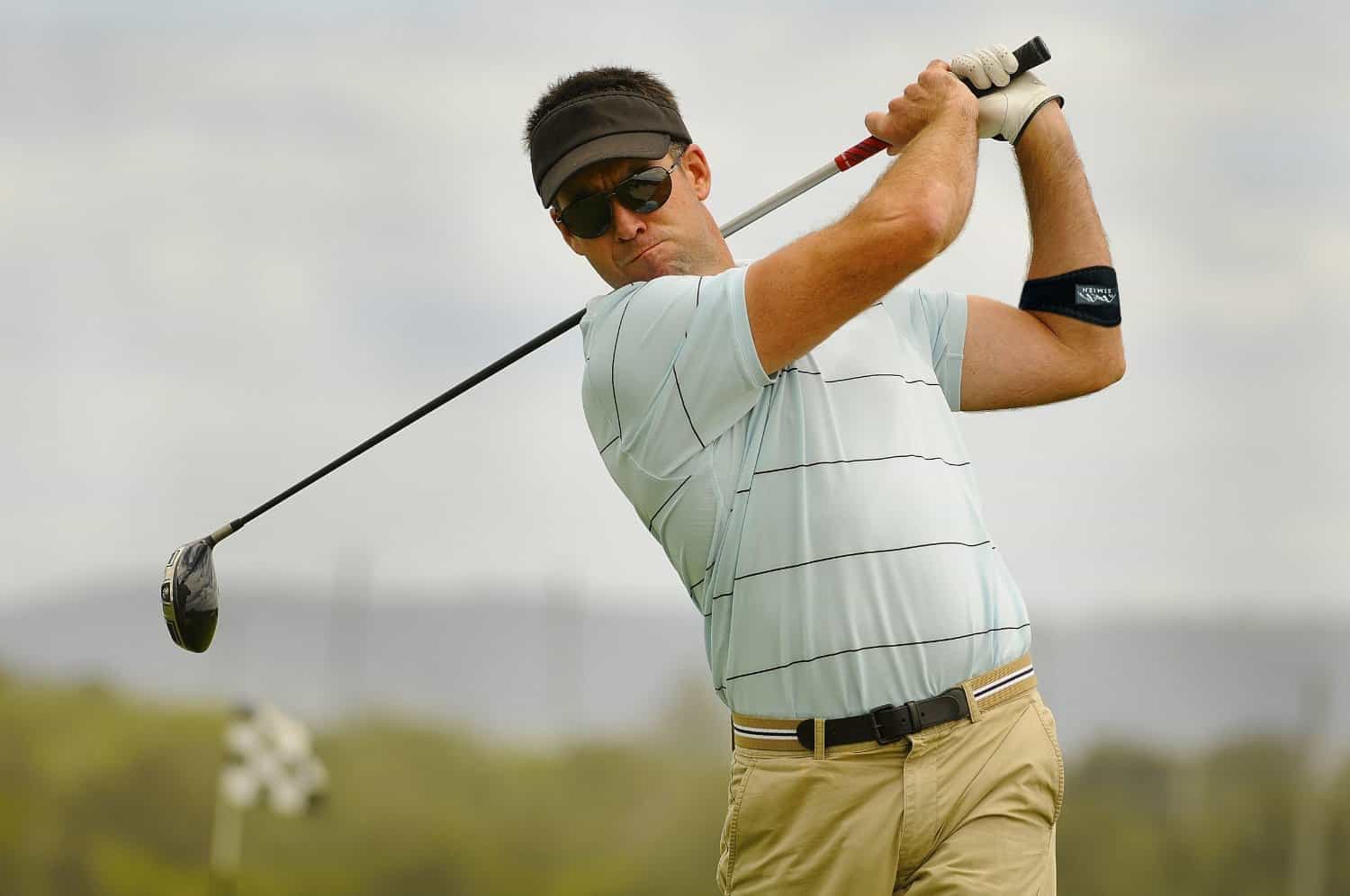 Golfer’s elbow and tennis elbow are two very common ailments of the elbow. While they are common, they can also directly interfere with daily activities and lower your overall quality of life, particularly if any sort of chronic pain is present. If you don’t play golf or tennis, unfortunately, that doesn’t mean you are out of the woods just yet. These are terms used to describe their associated conditions in a more understandable manner, and the names come from the fact that those activities can place you at higher risk for developing the condition. In this article, we will expand on these elbow conditions more thoroughly, hopefully providing you with a sound understanding of the pathology behind these sources of pain, as well as what you can do about them should you have one of these conditions.

The formal term for golfer’s elbow is medial epicondylitis. Whenever you see the word “medial” in relation to the human body, that typically means more towards the midline of the body as if you were standing upright with your arms straight down and palms facing forward (the anatomical position). Epicondyles are certain bumps or projections on bones, which are often associated with the attachment of muscles and their tendons. Whenever you see “itis” at the end of a medical term, it generally refers to inflammation.  So, putting this all together, we end up with a condition that affects the region of these bony projections (epicondyles) that are found on the inside of the elbow (medial) and is associated with inflammation of the surrounding structures. There are lots of contours, dips, bumps, projections, lines, etc, on our bones that serve as points of attachments for various structures. So why is the medial epicondyle of the elbow a particularly vulnerable location? The main reason is that the medial epicondyle serves as the attachment point for not one muscle, but 5 key muscles that have functions at both the elbow and the wrist. This has led to the development of another term commonly used in medicine, which is the “common flexor origin” or “common flexor tendon”, which refers to the medial epicondyle of the elbow and the muscles that originate (attach) at this point. These muscles are summarized in the table below.

The symptoms of golfer’s elbow and tennis elbow are very similar, with the key difference being that they occur in different locations. Pain is the #1 symptom with severity ranging from a mild ache to an excruciating throbbing ache. Elbow movements tend to cause a flare-up of pain, which can lead to a downward spiral of inactivity due to pain. Stiffness is also a common complaint, particularly for those who get to the point where they need to rest their elbow to feel better, avoid elbow movements, and gradually stiffen up. The main movements that can cause some of the pain to come on are active wrist flexion (using your muscles to flex your wrist), passive wrist extension (stretching the muscles on the front of your forearm), and this is usually in combination with movements at the elbow, particularly straightening the elbow. These types of movements at the wrist and elbow joint are common in golf, hence the name golfer’s elbow, but they can also be present in lots of occupations. It is not uncommon for carpenters or other laborers to experience symptoms of golfer’s elbow.

Treatment for golfer’s elbow will depend on severity and frequency of symptoms, as well as your typical activity level. That said, there are a few go-to treatments that tend to be effective for much of the affected population.  First, it has recently been discovered that isometric muscle contractions can be very effective in treating conditions that involve longterm pain of tendons, which fits the bill for medial epicondylitis. This is a great idea for those who have chronic golfer’s elbow, or have had it for a long time, and are experiencing flare-ups in pain. “Isometric” may sound complicated, but all it means is that you use/contract a muscle without actually doing any movement. In this case, simply making a fist and trying to flex your wrist using your other hand as resistance (so not actually moving your wrist) can be effective for this. For more long term management, exercises tend to focus on eccentric exercises, which is a little more complicated than isometric exercises. Eccentric exercises involve lengthening the muscle while still contracting it. This may sound weird at first, but we actually do this a lot without even realizing it. For example, when you walk down stairs, you are actually using your quad (thigh) muscles while stretch intermittently. For golfer’s elbow, it is common to use elastic tubing or a Thera-band. In this case, you would hold the tubing with your wrist starting in a flexed position and resistance being felt in the tubing. Then, slowly allow the tubing to bring your wrist back into a neutral position in a slow and controlled manner. This should stretch those muscle on the common flexor origin while you are using them to control the motion at the same time. Lastly, golfer’s elbow braces are quite popular, as they can help to alleviate pain while using the muscles/tendons that are injured. They work by compressing the affected tendons, which will slightly alter the line of pull when you are using them, giving them a break from the usual stress while still keeping them active, potentially for rehabilitation. The following video, courtesy of physiotherapists Bob and Brad, provides some great discussion and examples of exercises for golfer’s elbow.

If you have read the info about golfer’s elbow, aka medial epicondylitis, then you already have much of the information you need to understand lateral epicondylitis. Whenever you see the word “lateral” in relation to human anatomy, this tends to denote away from the midline of the body, assuming you are standing upright with arms straight down and palms facing forward. For example, your arms are each lateral to your spine. In the case of the lateral epicondyle of the elbow, it is located at approximately the same level as the medial epicondyle, but it’s on the outside of the elbow as opposed to the inside. Once again, lateral epicondylitis refers to inflammation or longterm breakdown of the tendons that attach to the lateral epicondyle of the elbow. The main movements that bring on symptoms of tennis elbow are active wrist extension (e.g. using your muscles to move your wrist into extension, such as a backhand swing in tennis), passive wrist flexion (stretching those same muscles), and these are usually worse in combination with an extended (straightened) elbow. Just like the medial epicondyle, the lateral epicondyle has numerous muscles that all originate here and travel down the forearm into the wrist hand hand to control movement of everything from the elbow and below. These muscles are summarized in the following table.

The symptoms of tennis elbow are extremely similar to golfer’s elbow, just located more on the outside of the elbow as opposed to the inside of the elbow. Additionally, someone with tennis elbow may feel more stiff on the back of their forearm as opposed to the front of their forearm. Pain is definitely the most common symptom. It can be mild pain only noticed during activity, or it can be constant aching pain that becomes even worse with activity. This makes it a problem for athletes or professions that involve a lot of arm work, as any sort of repetitive elbow motion can exacerbate symptoms.

As we mentioned with golfer’s elbow, tendonitis and tendinopathy conditions (basically anything that involves tendon damage over time) responds quite well to isometric exercises, assuming pain is the chief complaint and main thing to be addressed. This is more of a short-term fix, but can be highly effective for those who are living with fairly constant pain and have been experiencing recent flare-ups. In this case, a good starting point is to keep the wrist of the affected arm in a neutral position, use your other hand to try and push it into flexion (so curling it in), but resisting this movement so you don’t actually see any movement at all. In other words, if you were to move the good hand away that you are using for resistance, your affected wrist would want to bend backwards. For longterm management of tennis elbow, eccentric exercises are once again the go-to, as these exercises have shown to really help patients recover from and prevent future occurrences of tennis elbow. An example of an eccentric exercise for the common extensor tendon is to use a Thera-band or elastic tubing. Start with your wrist in an extended position (bent back) with resistance already being felt in the band. Then, in a very slow and controlled manner, allow the band to bring your wrist back into a neutral position. In this way, you are stretching those muscles and tendons while also contracting them at the same time. Just like golfer’s elbow, there are tennis elbow straps available to aid in the recovery and management of tennis elbow and associated conditions. These are by no means “cure-all” solutions, but they do provide an additional tool to help decrease your pain while you work towards recovery or prevention of future instances. The following video, courtesy of physiotherapists Bob and Brad, provides some great discussion and examples of exercise for tennis elbow.

This article attempted to summarize golfer’s elbow vs. tennis elbow by providing you the need-to-know information. We recognized we provided some additional details that may be a little more specific than necessary, but we truly believe that understanding the mechanisms behind an injury is one of the best tools towards subsequent recovery. We wish you all the best in your recovery or prevention of these conditions, and don’t be shy to ask about anything that may be unclear in our article.

Braceaccess.com is a participant in the Amazon Services LLC Associates Program, an affiliate advertising program designed to provide a means for sites to earn advertising fees by advertising and linking to amazon.com. Amazon and the Amazon logo are trademarks of Amazon.com, Inc. or its affiliates

Individual results may vary. Brace Access does not dispense medical advice. The contents of this website do not constitute medical, legal, or any other type of professional advice. Information related to various health, medical, and fitness conditions and their treatment is not meant to be a substitute for the advice provided by a physician or other medical professional. You should not use the information contained herein for diagnosing a health or fitness problem or disease. Rather, please consult your healthcare professional for information on the courses of treatment, if any, which may be appropriate for you.