Most of us are familiar with the wrist joint in a general sense – it’s the connecting factor between the arm and the hand. However, most are unfamiliar with the exact anatomy, how the wrist works, and why certain injuries and conditions are more common than others where we may need to use a wrist brace for carpal tunnel syndrome.

The main reason for the surprisingly low understanding of the wrist joint is due to the complexity of the anatomy in this region of the body. It’s not one simple joint like the elbow, which can be simplified into a hinge joint, but rather, can be more appropriately though of as the wrist joint complex.

We won’t get into the finer details of the wrist anatomy, as this isn’t really necessary to gain a basic understanding of what’s really going on in there. Furthermore, the chronic injury we will discuss here, carpal tunnel syndrome (CTS), doesn’t really require a full overview of the anatomy.

Bones in the Wrist Joint

There are actually a lot of bones involved in the wrist joint, so let’s break this down systematically. First, at the most proximal aspect of the wrist (i.e. closest to the arm) is the radiocarpal joint. This joint is formed between the radius, which is the bigger of the two forearm bones, and the proximal row of carpal bones (scaphoid, lunate, triquetrum), which are the smaller bones you can feel at the very bottom of your hand. This joint is responsible for about the first 2/3 of wrist flexion and extension, as well as some ulnar and radial deviation (aka adduction and abduction, respectively), and the radiocarpal joint itself is classified as a synovial ellipsoid joint. 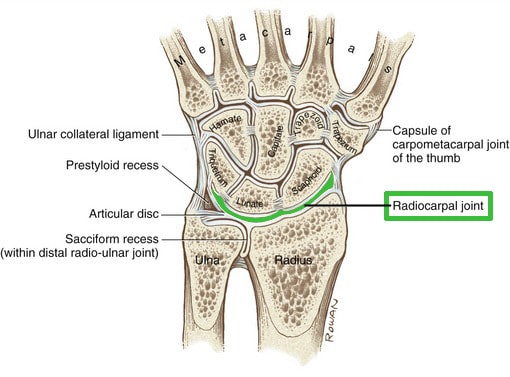 While the radiocarpal joint could be considered the primary wrist joint, there are considered to be two other joints in the overall wrist joint complex as well. These certainly aren’t negligible, as they contribute to the motions involved at the radiocarpal joint to a significant degree (up to 30%!), but we will only mention them briefly, as it can get pretty confusing.

The midcarpal joint, which is located between the proximal row of carpals (scaphoid, lunate, triquetrum) and the distal row of carpals (trapezium, trapezoid, capitate, and hamate), accounts for the remainder of wrist flexion and extension. This is a synovial hinge joint, meaning that it operates predominantly in flexion and extension only. The two rows of carpal bones each function as a unit, moving together in unison.

The intercarpal joints are the articulations between two individual carpal bones, so there is technically more than one intercarpal joint. These joints are classified as synovial plane joints, and only allows for a small degree of gliding between individual bones. This enhances the overall compliance of the wrist joint, but doesn’t contribute much to the overall movement of the wrist joint.

Muscle Acting on the Wrist Joint

There are a lot of muscles that act on the wrist joint to produce wrist extension, flexion, ulnar deviation (adduction), and radial deviation (abduction). These muscles mainly originate in the forearm, and their tendons cross the wrist joint to insert on to the hand and fingers. These muscles are responsible for the bulk of the movement at the hand and wrist, while the tiny intrinsic hand muscles are mainly for fine motor control. 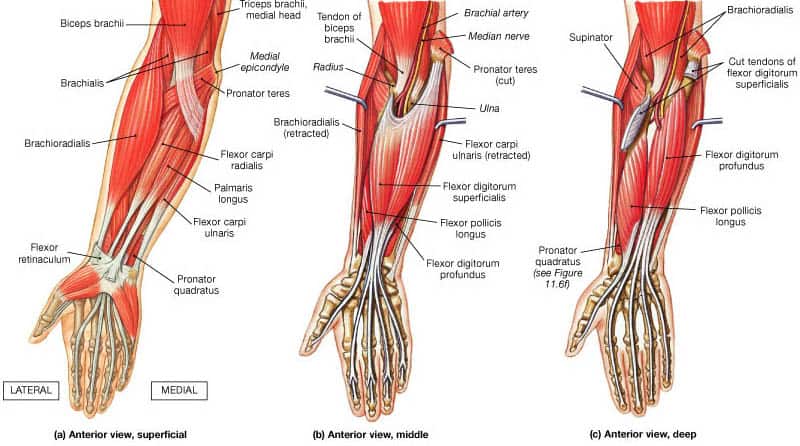 Nerves of the Wrist

The nerves of the wrist actually arise from spinal nerve roots in the neck. These nerves run across the shoulder in the form of the brachial plexus where they eventually split into individual nerves just before descending down the arm. Not including some slight deviations, the radial nerve extends down the back of the arm, the ulnar nerve runs down the inside of the arm, and median nerve is generally found running down the middle of the front of the arm. The branches that eventually supply the wrist joint include the anterior interosseous branch of the median nerve, the posterior interosseous branch of the radial nerve, and the dorsal and deep branches of the ulnar nerve. 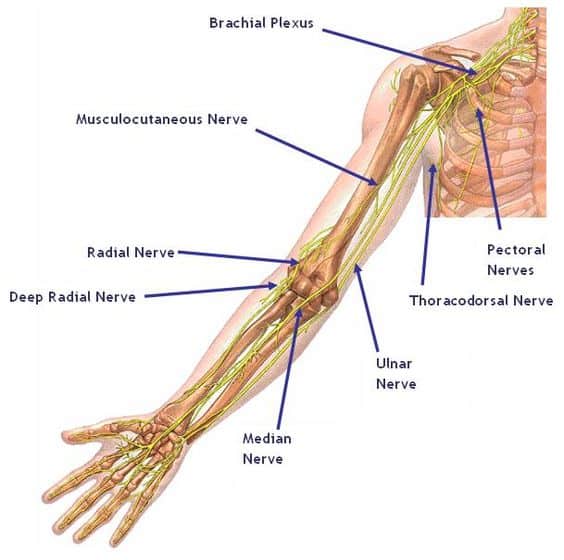 Carpal Tunnel Syndrome (CTS) is one of the most common and debilitating conditions that affects the wrist joint. In order to understand how and why the condition arises, we must understand the structure of the carpal tunnel itself. Basically, the carpal tunnel is a passageway for the tendons and nerves of the forearm to travel into the wrist and hand. The “walls” of the tunnel are formed by the bones and ligaments of the wrist, while the tendons and nerves travel through the tunnel and are protected from external forces by the bones and ligaments. 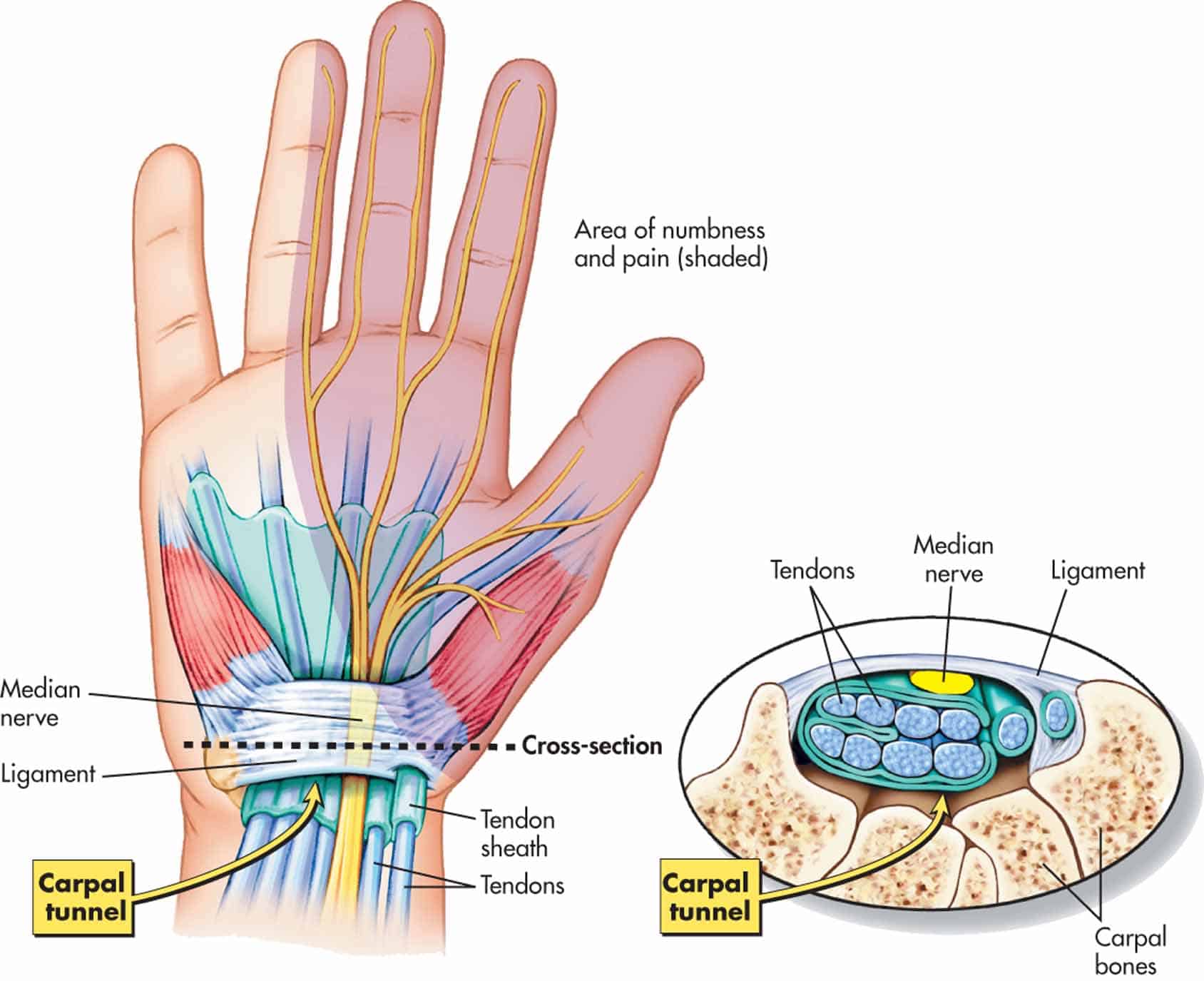 So now that we know what the carpal tunnel is, what is carpal tunnel syndrome? CTS results from the impingement or compression of the median nerve, which is one of the many structures passing through the carpal tunnel. This will arise in varied signs and symptoms, including tingling, numbness, burning, aching, and/or weakness of the wrist and hand.

Like the symptoms, the exact causes of the median nerve compression can also vary. CTS is fairly common following fractures to the wrist, which could alter the overall structure of the carpal tunnel. CTS is also common in people who spend a lot of time routinely typing on a keyboard. Repetitive tasks involving movement of the fingers and hand (particularly flexion), or maintaining the wrist joint in a position that isn’t neutral, can lead all lead to CTS. It also also thought that some people are at higher risk due to genetic factors, but this is still being sorted out.

Fortunately, CTS can usually be treated with a lot of success, especially if it is treated early. Periodic wrist bracing can help relieve the symptoms, anti-inflammatory drugs like Advil can be used to decrease any inflammation, and corticosteroids can be used to accomplish a combination of those effects. In more severe cases, surgery can be performed to treat CTS, but this is usually reserved as a last resort option.

We hope this simple guide to wrist anatomy and CTS has helped you understand the complexity of the wrist joint, as well as the general anatomy in more detail. Carpal Tunnel Syndrome is extremely common, and many people find wrist braces to be extremely helpful for this condition. If you think you may be experiencing the symptoms of CTS, we highly suggest visiting a doctor and getting it checked out, as early detection could save you a lot of pain and hassle down the road.

Braceaccess.com is a participant in the Amazon Services LLC Associates Program, an affiliate advertising program designed to provide a means for sites to earn advertising fees by advertising and linking to amazon.com. Amazon and the Amazon logo are trademarks of Amazon.com, Inc. or its affiliates

Individual results may vary. Brace Access does not dispense medical advice. The contents of this website do not constitute medical, legal, or any other type of professional advice. Information related to various health, medical, and fitness conditions and their treatment is not meant to be a substitute for the advice provided by a physician or other medical professional. You should not use the information contained herein for diagnosing a health or fitness problem or disease. Rather, please consult your healthcare professional for information on the courses of treatment, if any, which may be appropriate for you.